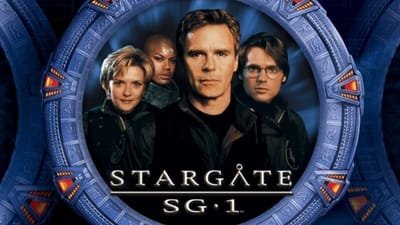 Stargate SG-1 is a television spin-off of Roland Emmerich's 1994 film Stargate. The series was developed for television by Brad Wright and Jonathan Glassner, who together wrote the two-hour pilot episode "Children of the Gods." "Children of the Gods" originally aired on July 27, 1997. Stargate: SG-1 was officially cancelled August 21st, 2006. "Unending," the final episode of the series, aired in the UK on March 13, 2007 and in the US on June 22, 2007.

Several million years ago, an ancient race of advanced humanoid beings, now known as the Ancients, created a device capable of near-instantaneous transportation across the universe with a subspace wormhole. This device, which has been used by countless races since its creation, has more commonly become known as a "Stargate" — a name, discovered by Dr. Daniel Jackson from hieroglyphs in the feature film.
Stargate SG-1 takes place in the present day. When the series began, only technology that existed at the time in "real life" was employed by the series' protagonists - humans from Earth who are known throughout the galaxy as the Tau'ri. In the preceding movie, Stargate, it was shown that in 1928 in Giza, Egypt, a mysterious ring was uncovered — buried in the sand long ago. However, it wasn't until 1995 that Earth discovered the device's true purpose and was able to use it for exploration.
Ever since their first mission to a planet known as Abydos, Earth has continued using the Stargate for both exploration and the defense of humanity from races elsewhere in the universe - for the first eight seasons of Stargate SG-1, a formidable parasitic enemy race known as the Goa'uld served as the main antagonist. To this end, the Stargate Program (which continues to be a secret to the public) was created with a mandate of acquiring knowledge, allies, and technology for the defense of the planet. However, Stargate Command (the base in which the program is located) has also focused on such efforts as trading and forming diplomatic relations with the rest of the galaxy. It was through this program (the main focus of Stargate SG-1) that Earth was able to acquire, over time, such necessities.

I BUILT MY SITE FOR FREE USING